Rollokamagaga is a simple arcade style breakout game where you try to maintain a high multiplier and get a high score by breaking bricks. But each time you hit a brick it will expand and increase its point value. And if there is no more room to expand, the brick will break. So the key for high scores is to let some bricks grow without breaking them.

SUCH a cute game with simple, pleasing visuals and clear vision. It was a bit easy to get stuck or just didn't understand the spinning stuff or how the numbers work, also the "boo" sound when losing a life is a bit sad ;( Amazing game jam project anyway!

Thanks! Yeah really decided to go for a very simple game so I'd have loads of time for polish.

What do you mean by getting stuck? Actually stuck somehow or just the ball bouncing around somewhere in the middle? The key to scoring well is the latter (and maintaining it too as it just keeps increasing the multiplier). The spin was really only added just to make getting stuck harder. Not sure if impossible though, still can at least jam the ball with the paddle so it gets stuck between the paddle and wall. And another use was to still have some form of control when the ball was doing its bouncing stuff. So kinda like slams in pinballs without the annoying tilt functionality.

The numbers are really very simple but of course they aren't that obvious to notice. When you hit a block, the number increases and it will expand to one of the four available directions. I run a collision check for all four directions  and then pick one of the unoccupied ones. And if there isn't a free option, the block will break. And when a block breaks, it leaves around a "ghost block" for a a short duration which blocks other blocks from appearing at that same spot immediately. This made the game less prone to go fully solo mode for too long periods of time.

I was getting stuck for some reason especially to the right side, so the character just bounces up and down and can't get it to move even with spinning. I'm not great at these types of games so I don't know if that's a huge issue for all players to be honest. And the numbers, again not really an issue to a player to not get them instantly I think, but I was just interested how they work :)

It's way too easy to get stuck on the side of the screen.

If you get stuck, you can give the ball spin by clicking left or right mouse button and get back into the game. 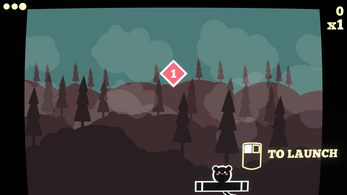 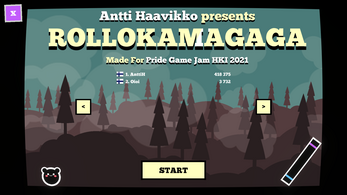 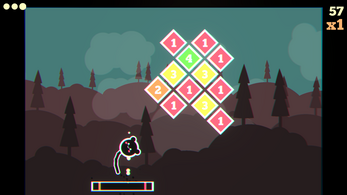 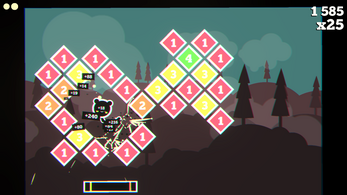 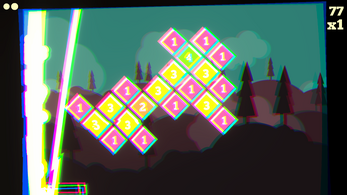 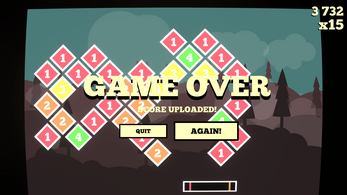